Usher to perform at 2010 ALL STAR GAME 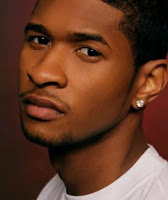 Usher is now confirmed to perform during half-time when the game airs Feb. 14.