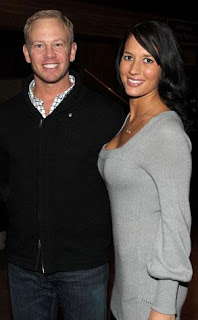 Ian Ziering and Erin Ludwig got married in front of friends and family on Friday night in Newport beach. The two have been together since Labor day 2009 and announced their engagement in February. Many of his former 90210 castmates were in attendance to watch the couple tie the knot. Brian Austin Green brought Megan Fox, Jennie Garth was accompanied by her husband Peter Facinelli and Jason Priestley had his wife Naomi as his date.

Reading this from the UK?

Check out our UK site!
OK, take me there now
No thanks