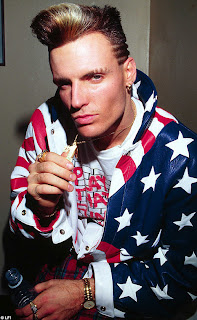 What’s more difficult to believe? That Vanilla Ice is still making music or that he has completed his SIXTH studio album??

He writes on his MySpace, “The album is awesome! It’s called ‘WTF’ for a reason, and you will understand that reason when you hear it. It has everything from techno to hip-hop to country to acoustic… It will blow you away!”

Vanilla Ice is also performing at this year’s Glastonbury Festival in the UK.