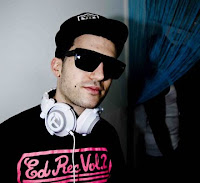 Today, Perez Hilton blogged saying that Montreal's DJ A-Trak was going to produce songs on Madonna's next album.
A-Trak himself took it to his twitter to deny it, saying it was a rumor.

"Here's my official statement: RT @pitchforkmedia A-Trak says he's not working with Madonna, as has been rumored"

Here is the text that was written.