The Killers take a break 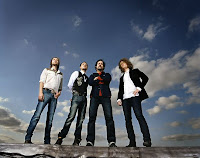 The Australian Associated Press reports that Killers guitarist Dave Keuning said during an interview that the band's Feb. 21st show in Melbourne will be their last!!

The Killers have been touring and recording non-stop since their first hit single in 2004 - The band has said in the past they really need a long break.