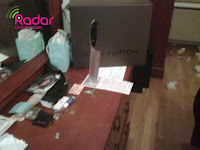 The police investigating the so called burglary of Jon Gosselin's apartment last month, think that it was all a publicity stunt.

What seemed intriguing to the cops was the large Japanese chef knife piercing a note to a table that was apparently from Hailey.

New York police believe that this was staged